Now, even children’s holiday books are infested with junk science. 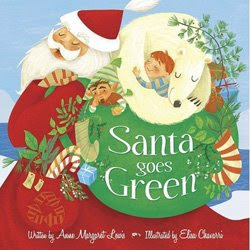 ’Tis the season … to be green. No, not even the traditions of Christmas are immune to the efforts of global warming activism.

No, it’s not Al Gore’s, “How Greenhouse Gases Stole Christmas,” but a children’s story is pushing a similar green agenda. The recently published book by Anne Margaret Lewis called “Santa Goes Green” is about a boy who writes Santa and asks him to help raise awareness about global warming so that his adopted polar bear won’t lose its home.

“You see, it’s like this Santa,” the book reads. “I’ve adopted a polar bear named Leopold. He is in danger of losing his home. I’m sure you being in the North Pole you know about the melting glaciers. All I want this year Santa, is to save Leopold and his home.”

Santa Claus visits the boy, takes him to see the polar bear and then in a moment of eco-awakening, he makes his operations at the North Pole green.

“They arrived back at the North Pole and Santa had a grand idea,” the book reads. “He leaned in toward Swift [the head elf] and told him his new plan. ‘We will collect all of the old toys, Swift, and make them new again. We will reuse last year’s wrapping paper. And we will harness the great North Pole wind to help power up the toy shop.’”

Santa’s Christmas may be green but Canada will see its first white Christmas since 1971 this year.