Ho-Ho-Ho… Ahmadinejad Will Give Christmas Message On British TV to Counter Queen …Update: Mahmoud Says Christ Would Oppose US Warmongers

Unreal!… Mahmoud Ahmadinejad will give the official response to the Queens Christmas Address on British TV this year! 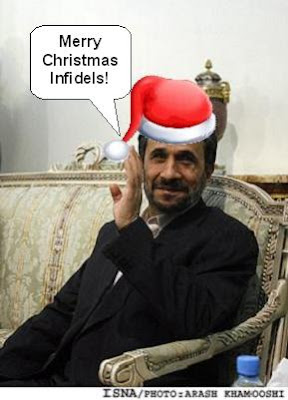 Could it get any weirder than this?
Iranian President Mahmoud Ahmadinejad will give a Christmas message on British TV following the Queen’s annual Christmas address.
AFP reported:

Ahmadinejad will give a brief speech which will go out on 1915 GMT on Christmas Day.

A Channel Four spokesman said the message is a spiritual one and includes Ahmadinejad’s wishes for seasonal goodwill.

Channel Four has invited a figure in the news to deliver an alternative Christmas message to the queen’s annual broadcast every year since 1993 but Ahmadinejad is the most high-profile guest yet.

The channel’s head of news and current affairs Dorothy Byrne said: “As the leader of one of the most powerful states in the Middle East, President Ahmadinejad’s views are enormously influential.

“As we approach a critical time in international relations, we are offering our viewers an insight into an alternative world view.”

Honestly, what do they expect?… “Merry Christmas. Let’s wipe Israel off the map?”

Earlier this week we read that Great Britain has lost its will to fight… now this.
What’s next?

In his recorded message, Ahmadinejad offers seasonal greetings to Christians and says he believes that if Jesus were alive, he would “stand with the people in opposition to bullying, ill-tempered and expansionist powers,” an apparent reference to the United States and its allies.

According to a transcript of the broadcast released in advance, Ahmadinejad says most of the world’s problems stem from leaders who have turned against religion. He doesn’t refer to rival nations or leaders by name or raise the issue of Israel, despite his previous calls for the removal of the Jewish state.

“If Christ were on earth today, undoubtedly He would hoist the banner of justice and love for humanity to oppose warmongers, occupiers, terrorists and bullies the world over,” Ahmadinejad said, according to the text.

If he keeps that up he may land a job at The Guardian.