The horror!
That crappy atheist sign that was posted next to the Nativity scene in the Washington State Capital Building was stolen today. 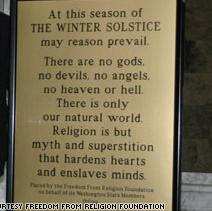 They found it in a ditch. (CNN)

An atheist sign criticizing Christianity that was erected alongside a Nativity scene was taken from the Legislative Building in Olympia, Washington, on Friday and later found in a ditch.

An employee from country radio station KMPS-FM in Seattle told CNN the sign was dropped off at the station by someone who found it in a ditch.

“I thought it would be safe,” Freedom From Religion Foundation co-founder Annie Laurie Gaylor told CNN earlier Friday. “It’s always a shock when your sign is censored or stolen or mutilated. It’s not something you get used to.”

The sign, which celebrates the winter solstice, has had some residents and Christian organizations calling atheists Scrooges because they said it was attacking the celebration of Jesus Christ’s birth.

“Religion is but myth and superstition that hardens hearts and enslaves minds,” the sign from the Freedom From Religion Foundation says in part.