When Republican Norm Coleman won the election by 725 votes on election day you knew this senate seat was lost.
Sure enough- It looks like Al Franken may sneak out a win in Minnesota.
How sad. 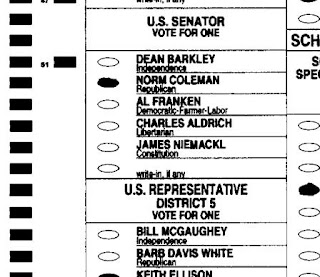 The Minnesota Canvassing Board claimed this vote is clearly for Franken?

The Canvassing Board overseeing the vote recount for Minnesota’s tightly contested U.S. Senate race isn’t quite done examining disputed ballots, but using their numbers the Minnesota Star Tribune issued a projection Saturday night that Al Franken will pick up 270 votes when the board is finished. Currently the board is determining voter intent in disputed ballots. If the projection proves correct, Franken will beat incumbent Sen. Norm Coleman by 78 votes.

Vote totals have changed a lot since Nov. 4, when Coleman led Franken by 725 votes. Correcting typos cut Coleman’s margin to 215, and a recount by all the counties reduced it further to 192. Yet, the additional 270 votes picked up by Franken from the Canvassing Board’s decisions have been among the most controversial.

The vote pickup has occurred through two actions by the board — divining voter intent and determining what votes should be counted. While decisions to include missing or overlooked ballots have gotten the most attention, the process of determining intent has also been important in determining the outcome here.

The Canvassing Board faces a difficult task in divining voter intentions. It is very difficult to determine how a voter meant to vote simply by looking at what might be stray marks on the ballot. And whatever rules are adopted must be consistently used in evaluating all ballots.

The Canvassing Board is meeting Tuesday to continue to count the remaining votes.

Jim Hoft
Jim Hoft is the founder and editor of The Gateway Pundit, one of the top conservative news outlets in America. Jim was awarded the Reed Irvine Accuracy in Media Award in 2013 and is the proud recipient of the Breitbart Award for Excellence in Online Journalism from the Americans for Prosperity Foundation in May 2016.
THOUSANDS Rally for President Trump in Beverly Hills, California (Video)
Larry C. Johnson: Joe Biden – The Art of the Steal and China Deal
New Text Messages Show Joe Biden Reaching Out to Hunter's Associates for Financial Help for His Son -- After He Said This Never Happened
UPDATE: Twitter Suspends TGP and Bans New Report with Photo of Hunter Biden Smoking Crack with Link to Foot Sex Video -- Twitter and Facebook Suspend Anyone who Reposts TGP Reporting -- Just Like in Communist China!
BREAKING: China's GTV Releases Two More Videos of Hunter Biden -- Sex Selfies from Laptop -- Videos 3 and 4
See more...