“Deep Throat” died today. The former FBI second-in-command who revealed himself as “Deep Throat” in 2005, 30 years after he tipped off reporters to the Watergate scandal, passed away this morning.
Look for another round of Nixon bashing from the media. 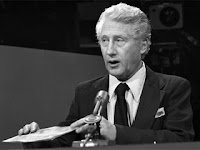 Of course, as Ann Coulter reported back in 2005, there was no “Deep Throat.”
The fictional character was actually a composite of several sources:

Felt leaked details of the Watergate investigation to the Washington Post only because he had lost a job promotion – making him the Richard Clarke of the Watergate era. This will come as small consolation to the Cambodians and Vietnamese tortured and slaughtered as a direct result of Nixon’s fall. Oh, well. At least we got a good movie and Jimmy Carter out of it…

Still, it must pain liberals to be praising an FBI man who ordered illegal searches of their old pals in the Weather Underground in the early ’70s. For those searches, Felt was later prosecuted by the Carter administration.

Ironically, only because of Watergate – which Felt helped instigate – could a nitwit like Jimmy Carter ever become president – a perch from which Carter pardoned draft dodgers and prosecuted Mark Felt. No wonder Felt kept denying he was “Deep Throat.”

All this time, Nixon had suspicions about Felt being Deep Throat. Others may attribute Nixon’s kindness toward Felt to Nixon’s high principle and class. I prefer to think of it as sadism.

As most people had generally assumed, the shadowy figure who made his first appearance in a late draft of “All the President’s Men” was a composite of several sources – among them, apparently, Mark Felt. But in telling the glorious story of “How The Washington Post Saved America,” it was more thrilling to portray Deep Throat as a single mysterious individual, spilling his guts to Bob Woodward.

Deep Throat was a smoker and heavy drinker, neither of which describes Mark Felt.

Woodward claimed he signaled Deep Throat by moving a red flag in a flowerpot to the back of his balcony and that Deep Throat signaled him by drawing the hands of a clock in Woodward’s New York Times.

But in his 1993 book, “Deep Truth: The Lives of Bob Woodward and Carl Bernstein,” Adrian Havill did something it had occurred to no one else to do: He looked at Woodward’s old apartment!

Havill found that Woodward had a sixth-floor interior apartment that could not be seen from the street. Even from the back of the apartment complex, the balcony was too high for any flowerpot to be seen. So unless there was a “second flowerpot,” visible from a nearby grassy knoll, the red flag in the flowerpot story is … well, full of red flags.

You sure won’t read that in the glowing media reports today on Mark Felt.