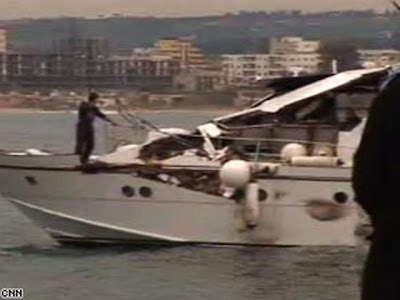 The pro-Hamas activists sailing on “The Dignity” relief boat were rammed by an Israeli ship. They did not heed the warnings by the Israelis to turn back away from the war zone.

A CNN reporter was riding on the pro-Hamas boat(?) when it was rammed.
Here is his account:

Israeli gunboats rammed the pro-Hamas solidarity ship and opened fire into the water nearby, damaging the Free Gaza ship and sending it limping home. 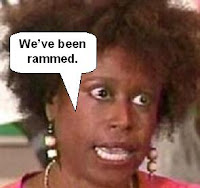 A boat carrying international peace activists, including former Georgia congresswoman Cynthia McKinney, and medical supplies to the embattled Gaza Strip sailed back into a Lebanese port on Tuesday after being turned back and damaged by the Israeli navy, organizers of the trip said.

The crowds on the docks in the Lebanese port city of Tyre were jubilant and cheering as they welcomed the vessel.

The boat, which set off from Cyprus Monday wanted to make a statement and deliver medical supplies to embattled Gaza. The trip’s organizers said the boat was clearly in international waters, 90 miles off the coast of Gaza, at the time of its close encounter with the Israeli navy.

“Our boat was rammed three times, twice in the front and one on the side,” McKinney told CNN Tuesday morning. “Our mission was a peaceful mission. Our mission was thwarted by the aggressiveness of the Israeli military.”

She called on President-elect Obama to address the Gaza crisis, saying the weapons being used by Israel were supplied by the United States.

She denied that the incident was an accident, caused whent he captain of the Dignity tried to maneuver past the Israeli blockade. “What the Israelis are saying is outright disinformation,” she said. “What happened to us last night was a direct threat to our mission, but not our cause.”

The Elder of Zion has more on the boat attack including video.

Israel Matzav reported that the moonbats accused Israel of ‘piracy on the high seas.’