Mr. Muntader al-Zaidi is very lucky that it was Mr. Bush and Mr. Maliki and not Saddam Hussein. Because, had it been Mr. Saddam Hussein you would be carrying a different plaque by now. Number 2, in our country, I know that people have told you that showing shoes at someone is an insult. But, it is a bigger insult to the host; in our culture anyone who insults a guest is insulting the host. So in our culture we believe that what Mr al-Zeidi did was reprehensible.

The anti-American Marxist front group Code Pink ambushed Iraq Ambassador to the United States, Samir Sumaida’ie, during a presentation in Washington on Tuesday.
They demanded that shoe-chucker and Sadrist Muntader al-Zaidi be released after his assault on President Bush.
The Code Pink blog described the showdown:

In D.C. this morning, the Iraq Ambassador to the United States, Samir Sumaida’ie, paused during a presentation to address a handful of women from CODEPINK who were holding signs in the audience reading “Free al-Zaidi” and “al-Zaidi speaks for me.” The signs were to show their support for the Iraqi journalist who was taken into police custody after throwing his shoes at President Bush during a Baghdad press conference on Sunday.

The Ambassador directly acknowledged the women’s presence in the audience. He called al-Zaidi’s act disgraceful and said the journalist was lucky that he didn’t try something like this under Saddam Hussein.

That was yesterday- now today…
CODE PINK GLORIFIES ASSAULT ON PRESIDENT BUSH
Of course.
The anti-American Marxist front group Code Pink is holding a rally today at the White House in support of shoe-chucker Muntadar al-Zaidi.
The Raw Story reported:

The theatrical anti-war group Code Pink plans to gather outside the White House today to protest for the release of the Iraqi journalist who hurled his shoes at President Bush over the weekend.

The activists plan to show up with a “large supply of shoes” in order to show solidarity with Muntader al-Zaidi, who has been in custody since disrupting a weekend press conference with the size-10 projectiles.

It’s unclear whether there are plans to actually throw the shoes at the White House, but there’s been some discussion of setting up a cardboard cut-out of President Bush and offering prizes to anyone able to knock it over. Bush nimbly dodged the shoes that were flung at his head during the press conference, but White House press secretary Dana Perino sustained a black eye in the resulting melee…

“It’s outrageous that al-Zaidi could get two years in prison for insulting George Bush, when Bush is directly responsible for the deaths of 1.5 million Iraqis and 4,200 U.S. troops, and 5 million displaced Iraqis,” Code Pink’s Medea Benjamin said in a news release. “The one who should be in jail is George Bush, and he should be charged with war crimes.”

In Berkeley, Code Pink will hold a march at a Marine recruiting station this morning to show their solidarity with the journalist who assaulted Bush.

UPDATE: This Ain’t Hell has photos from today’s protest. 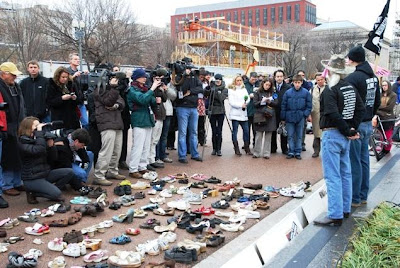 The media outnumbered the protesters 3-1.