Beautiful. At first they threatened and attacked those who supported Proposition 8. 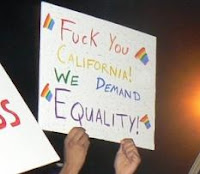 Now the hooligans have a new tactic.
They’re just are going to ignore the wishes of the people and discount the vote.
California Attorney General Jerry Brown is urging the state Supreme Court to void Proposition 8.
The AP reported:

In a dramatic reversal, Brown filed a legal brief saying the measure that amended the California Constitution to limit marriage to a man and a woman is itself unconstitutional because it deprives a minority group of a fundamental right. Earlier, Brown had said he would defend the ballot measure against legal challenges from gay marriage supporters.

But Brown said he reached a different conclusion “upon further reflection and a deeper probing into all the aspects of our Constitution.”

“It became evident that the Article 1 provision guaranteeing basic liberty, which includes the right to marry, took precedence over the initiative,” he said in an interview Friday night. “Based on my duty to defend the law and the entire Constitution, I concluded the court should protect the right to marry even in the face of the 52 percent vote.”

Jerry Brown to black and Latino voters: Screw you. 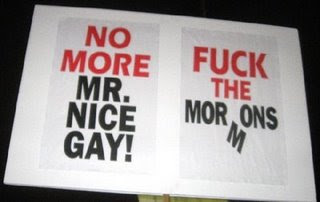 Who said, “Elections matter?”
The hooligan party has outdone itself this time.

On the flip side… Kenneth Starr will defend the gay marriage ban before the Supreme Court.

Gay Patriot has more on the recent protests.