This time the Iraqis sent out the Color guard meet him. 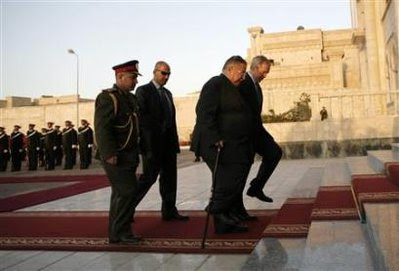 President George W. Bush says the work in Iraq has been hard, but is necessary for U.S. security and world peace.

Bush says he’s grateful he had the chance to return to Iraq a final time before his presidency ends.

Bush & Maliki Will Sign the SOFA within hours.
Voices of Iraq reported:

“A joint press conference will be held after signing the pact,” the source told Aswat al-Iraq.

Earlier today, Bush arrived on a surprise visit to the capital Baghdad and met with President Jalal al-Talabani.

Bush’s visit comes only 17 days ahead of the beginning of the implementation of the long-term security pact with Iraq, known as the status of forces agreement (SOFA), scheduled to come into effect on January 1, 2009.
On November 27, the Iraqi Parliament approved SOFA with a majority of 144 votes to 35 lawmakers, 29 of them are members of parliament from the Sadrist bloc of Shiite leader Muqtada al-Sadr.

President Bush will hold a rally with US troops later in the day.