History will be kind to George W. Bush. 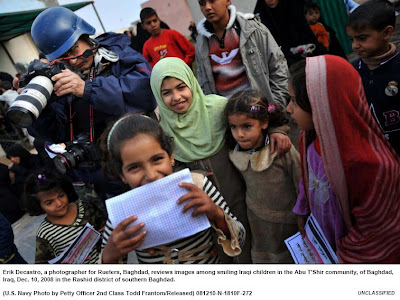 (MNF-Iraq photo– Click to Enlarge)
In the years ahead historians will look back at the Bush years and see a leader who kept America safe, a warrior who went on the offensive against Islamic terrorism, a Christian who liberated 50,000,000 Muslims from two of the most brutal regimes in modern history, a hero who would not leave the battlefront in defeat, a visionary who brought democracy to the Middle East.
Kevin Hassett at Bloomberg reported today:

The argument for his eventual vindication is stronger than many might expect.

On foreign policy, Bush emphasizes that he pursued a “freedom agenda” and spread freedom to Iraq. While the Iraqi future is far from clear, it is possible that the country becomes a democracy and a reliable ally of the U.S. If that transformation is completed, then it could well be viewed as a turning point in the war on terror.

On the home front, to virtually everyone’s surprise, we’ve avoided a terrorist attack since Sept. 11.

So it is hard to argue that Bush’s policies were a failure. The unpopular war may have trashed his party, but it didn’t have the same effect on the country…

The insignificance of Bush’s economic policy, though, might work to his advantage. We are in the midst of the worst recession of our generation, yet it is hard to attribute this crisis to anything that Bush actively did… Instead, the forces that allowed the financial sector to blow up — deregulation, for example — were in place when he took office.

…If we look back and see only a worse-than-normal recession, then the Bush legacy will depend on the future of Iraq, and its role in smoothing out the Middle East. In the best-case scenario, Bush will have been a good — maybe even a great — president. 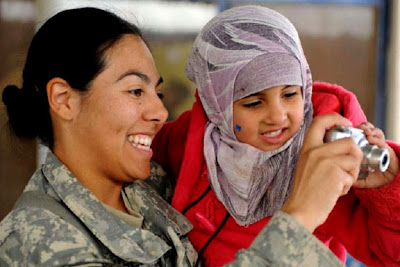 U.S. Army Staff Sgt. Angelina Mureno plays with a young Iraqi girl from the school for special needs children in Rumaythuh, Iraq, Dec. 11, 2008. The students are visiting Combat Operations Base Adder to have the girl’s hearing tested. If she qualifies, she will be given a hearing aid. Mureno is assigned to the 4th Brigade, 1st Cavalry Division. (U.S. Army photo by Staff Sgt. Brendan Stephens MNF-Iraq)

Ed Gillespie also adds a list of Myths vs. Facts on the Bush Presidency at Real Clear Politics that is something you won’t see reported in the liberal media.

UPDATE: The Iraqi Parliament authorised the government to sign agreements allowing British and other non-US troops to stay on in the country after 2008.

More… Julie McPhillips, the mother of Lt. Brian McPhillips, a hero who died serving his country in Iraq in 2003, thanks President Bush knowing that the sacrifice of her son would not be in vain.
The Wall Street Journal reported:

This Christmas, Mr. Bush’s last as commander in chief, Mrs. McPhillips would like him to know how grateful they are that Brian served a president who was determined, at great cost to his own popularity, to ensure that their son’s sacrifice would not be in vain.

“Mr. President,” she says, “Brian was proud to be a Marine. And he carried within him the same light that you do — a faith in God, in America, and in the dignity and worth of every man, woman, and child on this earth.”

“A blessed Christmas for you and your family, Mr. President.”

And to yours, Julie McPhillips.