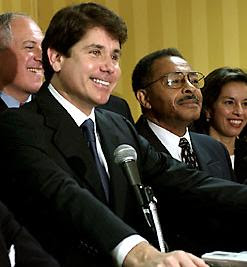 U.S. Senate Majority Leader Harry Reid (D-Nevada) said in a statement this afternoon that the Senate will not seat anyone Gov. Rod Blagojevich chooses to fill Illinois’ vacant Senate post, amid word that the governor is set to name former Illinois Attorney General Roland Burris.

The statement also is signed by U.S. Sen. Dick Durbin of Illinois, who has repeatedly urged Blagojevich not to name a replacement for the seat vacated by President-elect Barack Obama. The statement specifically names Burris, but applies to any choice the governor might make.

“This is not about Mr. Burris; it is about the integrity of a governor accused of attempting to sell this United States Senate seat,” the statement read. “Anyone appointed by Gov. Blagojevich cannot be an effective representative of the people of Illinois and, as we have said, will not be seated by the Democratic Caucus.”

That’s odd when you think about it…
The Dems are willing to steal a seat in Minnesota where Norm Coleman once led by 750 votes and now is down by 50, but the Dems are not willing to take Hot Rod’s pick?
What gives?