Today the channel is demanding that their reporter be set free.
They say his “freedom of speech” is being violated! 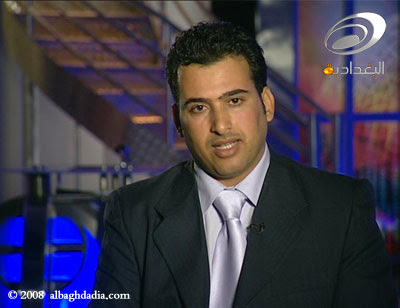 The American Left, Keith Olbermann, David Gregory, the AP and Islamic radicals everywhere have a new hero in Muntadar al-Zeidi.

Here’s the translated report from Al-Baghdidiya:

BAGHDAD (AFP) – The channel, “Baghdadi” which broadcasts from Egypt, the Iraqi authorities awaited the release of its correspondent Zaidi, who pelted U.S. President George W. Bush with his shoes on Sunday evening.

The statement, aired by the channel that “the Board of Directors of channel CBS claimed the Iraqi authorities to release immediately Mentsabha expected Zaidi in line with democracy and freedom of expression, which promised a new era and the Iraqis by the U.S. authorities.”

The statement added that “any action taken against the expected behavior but which has witnessed and experienced dictatorship era of violence and arbitrary arrests and mass graves and the confiscation of private and public freedoms.”

The statement also called “press institutions and international and Arab media and Iraqi solidarity with the expected release of Zaidi,” he said.

** There is a place for you to comment at the bottom of the Al-Baghdidiya article.
Please let this anti-American TV Channel know how you feel.

Also, Al-Baghdidia reported that global radical Islamic associations are sending their congratulations to the channel.

Albaghdadia’s web sight says it is an independent radio satiation started by Iraqi business man and engineer Dr. Aun Hassan Alghshlook on the 12th of September 2005. It is very obvious an anti-American channel with strong support for those who fight for Iraq’s freedom from colonialism (i.e.. those who fight the MNF especially the USA). It is heavily cloaked in a call for freedom of speech and civil rights and fight against terrorism.

I wonder what would have happened if journalist would have thrown a shoe at Mubarak or Assad king Fahd etc…. He would have been either killed on the spot or tortured and then killed.

Now to rumors. It is thought that Ghalil Aldulaimy, Sadam’s attorney, is involved in the station. Also it is said that he belonged to the ‘Udais student union’.

He faked his kidnapping with two of his brothers last year to bring attention to the channel. There appears to be some connection between Al-Baghdadi and Alsharqia also a Sunni channel with anti-American, anti Shiite and pro Baathist tendencies. etc…..

By the way the president of the “Iraqi media freedom observatory” condemned this journalist’s actions strongly and apologized, and many Iraqi journalists have done the same.

This journalist’s action is shameful and besmears all Arabs and Muslims. This is no way and a shame full way to treat a guest.

It sure must be a trip to witness this incident in Cairo, or Rijad, or Tehran, or Tripoli…
Knowing that this could never happen in their country without the attacker being tortured or killed.

UPDATE: Muntazer al-Zaidi, 28, detested the US and was planning the attack for months.