You could see this coming…
Tina Fey was honored with Entertainer of the Year Awards for her role in completely decimating the popular governor of Alaska on Saturday Night Live. 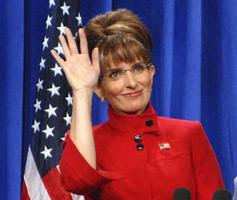 Fey made headlines for effectively portraying Sarah Palin as a complete incompetent hick from the sticks on the weekly show.
She has been a huge hit with the liberal media ever since.

At least the media was honest about this award:

Tina Fey is the entertainer of the year? You betcha. Fey was voted The Associated Press’ Entertainer of the Year, an annual honor chosen by newspaper editors and broadcast producers across the country.

Fey was selected by AP members as the performer who had the greatest impact on culture and entertainment in 2008.

Fey was successful in painting the Alaska Governor, who enjoyed an 80% approval rating in her state, as a complete idiot before the American public could get to know her.

Fey’s work did not go unnoticed by conservatives.
Newt Gingrich said Fey and Saturday Night Live should have been sued for slandering Palin while ignoring the many, many gaffes by Joe Biden and Barack Obama.

Obviously, Fey’s award was only possible because Palin was a conservative.

And, it’s also obvious the liberal media doesn’t give a flip that they are offending conservatives who saw Governor Palin grossly mistreated during the campaign.
Sick.