This was a horrendous crime in California this week.
Before you play the video compare the this photo to the one below of the 75 year-old victim:

The kids sold her an expensive vacuum and later came back and kidnapped her.
NBC Los Angeles video. 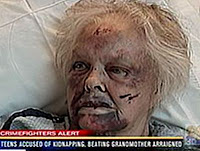 Three teenagers kidnapped and beat 75 year-old Natalie Herbst-Vinge in La Mesa this week. They drove around for 26 hours with the woman the trunk and denied her food and water. When she cried out for water they would beat her. (CBS 8)

Three teenagers accused of kidnapping a 75-year-old La Mesa woman and subjecting her to what a prosecutor called a “26-hour nightmare” pleaded not guilty today to torture and other charges.

Jeffrey Edward Nelson, 19, of Lakeside, Luis Lomeli Osborne, 18, and Antoinette Baker, 19, both of El Cajon, are accused of abducting Natalie Herbst-Vinge last week and keeping her bound and without food or water in the trunk of her own car as they went on a daylong joyride in it.

If convicted, they could be sentenced to life in prison. 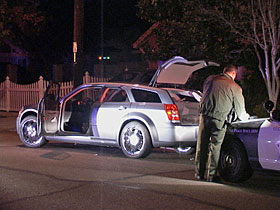 An investigator worked the scene in Lakeside where a car with a kidnapped 75-year-old woman in the back was pulled over early yesterday. Three people were arrested. (Signs on San Diego)