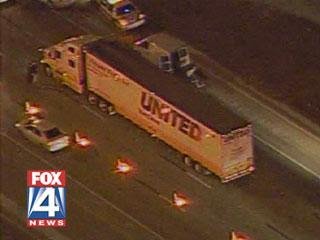 The killer shot at 3 semi-truck drivers on the Dallas highways. (MyFOX Dallas)

Police are searching for a white male who they believe is driving a light-colored Ford F-150 pickup for a series of bizarre shootings tonight in Dallas.
Dallas News reported:

Two drivers were shot dead and third injured on roads in northeast Dallas and Garland during Monday’s evening rush hour.

Police were investigating four incidents Monday after the first shooting was reported about 5:40 p.m. in Garland just north of LBJ Freeway. Police are working to establish whether three of the shootings in Dallas are related to a Garland shooting that was the first reported fatality.

“For whatever reason, this person is upset with something or someone and he’s taking it out on innocent victims going down the road and that’s very scary,” said Dallas police Sgt. Gil Cerda.

The first victim was a man driving a small two-door car on Jupiter Road, police said. He stopped at a red light at Marquis Drive and an extended cab Ford F150 pickup pulled up alongside. A balding white man in his 40s fired several shots at the car’s driver, killing him, said Officer Joe Harn of the Garland police.

Police said the pickup fled south on Jupiter Road. Minutes later it was reported that a man began shooting at a semi with no trailer between Royal Lane and Skillman Street. No one was injured.

UPDATE: Officials suspect a former Utah trooper in the shootings.