Here are a few reactions from around the world to the Obama win…
They are celebrating in Kashmir. 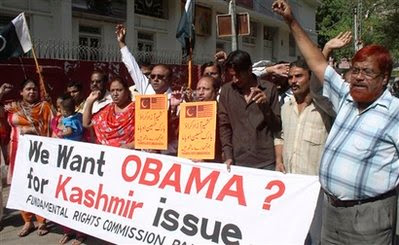 The Pakistani Prime Minister hopes for peace in the region:

Yousuf Raza Gilani, Pakistan’s prime minister, congratulated Obama on his victory, saying he hoped the Democrat would promote “peace and stability” in the region around Afghanistan.

“I hope that under your dynamic leadership, [the] United States will continue to be a source of global peace and new ideas for humanity,” he said in a statement, directed at Obama.

The Islamist Hamas movement, which rules the Gaza Strip, on Wednesday urged Barack Obama to learn from the “mistakes” of previous U.S. administrations in dealing with the Muslim and Arab worlds.

“He must learn from the mistakes of the previous administrations, including that of Bush which has destroyed Afghanistan, Iraq, Lebanon and Palestine,” said Hamas spokesman Fawzi Barhum.

“He must improve U.S. ties with the rest of the world rather than wave the big American stick,” Barhum said.

The official Iranian Republic News Agency urged Obama to re-evaluate America’s support of Israel and its harsh stance against the Iranian nuke program:

A senior parliamentarian said on Wednesday that Senator Barack Obama’s victory in the US presidential election was an indication to the failure of Washington’s foreign policy, particularly that of the George W. Bush.

Majlis First Vice-Speaker, Mohammad-Hassan Aboutorabi-Fard made the remarks while talking to reporters on the sidelines of the Majlis formal session this morning.

He added that the victory of Obama, who was a Democrat, was a sign of failure of the Republicans.

The MP urged Obama to take lessons from the failed and wrong policies of George W. Bush in the Middle East and adopt correct policy toward the Middle East.

Commenting on the US wrong policies on Iran’s peaceful nuclear program, unconditional support for Israel and invasion of Afghanistan and Iraq, he added that such policies resulted in the US isolation from the international community.

The genocidal Sudanese president also hoped for real change in relations with America after the Obama win:

Khartoum expressed hope that Obama’s election win would mean “real change” for the country’s strained relations with the US – America has branded Sundan as a “state sponsor of terrorism”.

“The result of the election is a purely domestic affair, but certainly the United States, being the only big power in the world, it affects almost everything in other countries,” said Ali al-Sadiq, a spokesman for Sudan’s foreign ministry.

“We would hope that the slogan of president Obama – ‘change’ – would be reflected in the foreign policy in the United States, especially towards Sudan and oppressed countries, the Palestinians, the Iraqis and the Somalis.

Venezuelam Marxist Chavez is hoping this means talks with the United States:

Chavez says that relations between Venezuela and the US, now at their lowest point in years, could improve in an Obama presidency.

During a televised speech on Sunday, Chavez said he would meet with Obama only “on equal and respectful terms.”

More… Bob McCarty has reaction from here at home.