This week Samir Kuntar was honored by the Syrian President.
Kuntar is famous for crushing the skull of a 4 year-old Israeli girl. 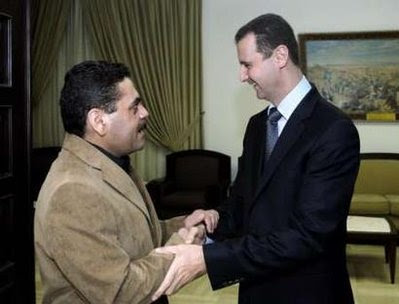 The Syrian News Agency says Kuntar received the Syrian Order of Merit during a meeting with Assad in Damascus Monday.

Kuntar was the longest-held Lebanese prisoner in Israel. He was imprisoned in 1979 after he was convicted of one of the grisliest attacks in Israeli history – killing a man in front of his four-year-old daughter, and then killing the girl herself by crushing her skull. Kuntar and four Hezbollah guerrillas were freed in July in exchange for the bodies of Ehud Goldwasswer and Eldad Regev, two Israel Defense Forces soldiers captured by the militant Hezbollah group in 2006.

Kuntar the killer told Assad that the Syrian flag will soon fly over the Golan Heights.

Boy… I bet you just can’t wait for those unconditional talks with this brutal regime.