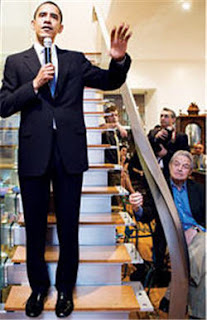 Figures.
This group is led by former Clinton and current Obama advisor John Podesta.
Discover the Networks has more on the think tank:

Robert Dreyfuss reports in the March 1, 2004 edition of The Nation: “The idea for the Center began with discussions in 2002 between [Morton] Halperin and George Soros, the billionaire investor. … Halperin, who heads the office of Soros’ Open Society Institute, brought [former Clinton chief of staff John] Podesta into the discussion, and beginning in late 2002 Halperin and Podesta circulated a series of papers to funders.”

Soros and Halperin recruited Harold Ickes — chief fundraiser and former deputy chief of staff for the Clinton White House — to help organize the Center. It was launched on July 7, 2003 as the American Majority Institute. The name was changed to Center for American Progress (CAP) on September 1, 2003. The official purpose of the Center was to provide the left with something it supposedly lacked — a think tank of its own.

The Center for American Progress was also involved with the anti-Bush Legacy Bus that traveled the country this year and pushed a snuff film of our soldiers being blown up in Iraq. One CAP advisor argued the success of the surge was a bad thing for America and Iraq. Another CAP advisor blamed Israel and backed Syria after the nuke plant attack last year. The leftist group was behind the dishonest smear campaign against Rush Limbaugh for his phony soldier comments. The group helped slander Bill O’Reilly for his so-called racist comments.
Quite a think tank, huh?

Here is more on how this Soros-backed Leftist group is influencing the Obama Administration:

Thanks in part to funding from benefactors such as billionaire George Soros, the Center for American Progress has become in just five years an intellectual wellspring for Democratic policy proposals, including many that are shaping the agenda of the new Obama administration.

Much as the Heritage Foundation provided intellectual heft for the Republican Party in the 1980s, CAP has been an incubator for liberal thought and helped build the platform that triumphed in the 2008 campaign.

“What CAP has done is recapture the role of ideas as an important political force, something the Republicans had been better at for 25 years,” said Walter Isaacson, president of the Aspen Institute, a non-partisan policy-research organization in Washington.

CAP’s president and founder, John Podesta, 59, former chief of staff to President Bill Clinton, is one of three people running the transition team for president-elect Barack Obama, 47. A squadron of CAP experts is working with them.

Some of the group’s recommendations already have been adopted by the president-elect.

These include the center’s call for a gradual withdrawal of U.S. troops from Iraq and a buildup of forces in Afghanistan, a plan for universal health coverage through employer plans and proposals to create purchasing pools that allow small businesses to spread the cost among a larger group of workers. Obama has endorsed much of a CAP plan to create “green jobs” linked to alleviating global climate change.

…To help promote its ideas, CAP employs 11 full-time bloggers who contribute to two Web sites, ThinkProgress and the Wonk Room; others prepare daily feeds for radio stations. The center’s policy briefings are standing-room only, packed with lobbyists, advocacy-group representatives and reporters looking for insights on where the Obama administration is headed.

Interesting. Thanks to the Center for American Progress the Left has mastered how to distribute their message –no matter how wrong or ill-conceived that message happens to be– to the American public.
If the right could just figure out how to better communicate their pro-American ideas of liberty, free markets, security, etc. it would change this nation’s political landscape.
Hopefully the right is working on this.