Radical gay activists are protesting the Mormon Church and threatening to burn down Christian churches and hunt down people of faith who supported the ballot measure. 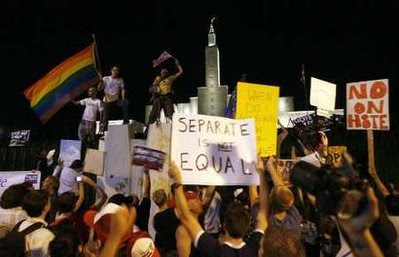 Robert Oliver (L) holds a rainbow colored flag as a woman who identified herself as Mama Joi (C) talks to a crowd while waving an American flag outside the Los Angeles California Temple of The Church of Jesus Christ of Latter-day Saints during a “No on Prop 8” march and rally on Santa Monica Boulevard in Los Angeles November 6, 2008. The protesters were marching to the Mormon Church which supported Proposition 8, the ballot measure that banned gay marriage, local media reported. (REUTERS/Danny Moloshok)

And, now this… After 70% of blacks supported Proposition 8 in California, radical gay mobs are attacking blacks at their protests.
Pam’s House Blend reported:

Geoffrey, a student at UCLA and regular Rod 2.0 reader, joined the massive protest outside the Temple of the Church of Jesus Christ of Latter-day Saints in Westwood. Geoffrey was called the n-word at least twice.

It was like being at a klan rally except the klansmen were wearing Abercrombie polos and Birkenstocks. YOU N*GGER, one man shouted at men. If your people want to call me a F*GGOT, I will call you a n*gger. Someone else said same thing to me on the next block near the temple…me and my friend were walking, he is also gay but Korean, and a young WeHo clone said after last night the n*ggers better not come to West Hollywood if they knew what was BEST for them.

Related… Jawa Report has more on the Left’s post-racial politics.