She’s ba-ack… Samantha Power is back on The Obama Team: 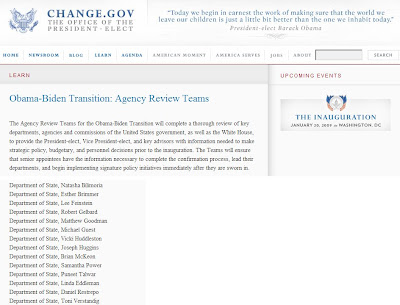 Click to Enlarge
Obama’s anti-Israel advisor is back on the team.
FOX News reported:

State Department officials said Friday that Samantha Power is among foreign policy experts the president-elect’s office selected to help the incoming administration prepare for Clinton’s anticipated nomination as secretary of state. The Obama transition team’s Web site includes Power’s name as one of 14 members of the “Agency Review Team” for the State Department. During the Democratic primary campaign, Power called Clinton “a monster” in an interview. She then resigned, calling her remarks inexcusable and contradictory to her admiration for Clinton.

This is the same Samantha Power who accused Israel of human rights violations and suggested that the US SHOULD SEND IN TROOPS TO IMPOSE A SOLUTION ON ISRAEL.

BG reminds us that it looks like Jew-hater Robert Malley is back on the team, too.