Things were already getting ugly…
There were already several angry protests against the Mormons in California, New York and Utah.
White powder was sent to Mormon Temples.
A Book of Mormon was torched ouside a Mormon Temple in Littleton.
Mormon restaurants were targeted: 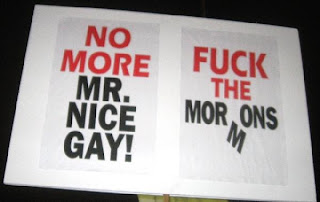 And, now this… today The New York Times painted a huge target on the Mormon Church by blaming church leaders for turning California against gay marriage. It’s as if it were only Mormons who were responsible for the passage of Proposition 8.

But, that isn’t the case at all.
It was the huge turnout of black and Latino voters that resulted in the passage of Proposition 8, outlawing gay marriage.
Why doesn’t The New York Times report that?