Besides the fact that Obama voted against funding our troops at war, voted to surrender to the enemy, picked radical anti-American racists as friends, palled around with terrorists, is a Far Left liberal Democrat while Lincoln was a Republican…
Besides all that… Obama and Lincoln do kinda sorta resemble eachother. 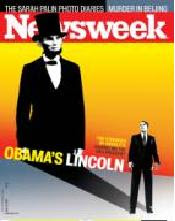 Related… Victor Davis Hanson notes that there is now no journalism as we knew it in America. It died during the campaign.

Jim Hoft
Jim Hoft is the founder of The Gateway Pundit, one of the top conservative news outlets in America. Jim was awarded the Reed Irvine Accuracy in Media Award in 2013 and is the proud recipient of the Breitbart Award for Excellence in Online Journalism from the Americans for Prosperity Foundation in May 2016.
DISGUSTING: Black Man Stops Car then Sucker Punches 12-Year-Old Boy Street Dancer in Missouri Giving Him Concussion (VIDEO)
Armed Black NFAC Protesters March at Stone Mountain in Georgia on 4th of July -- Bait White Militias for Armed Conflict
SICK: MSNBC Host Labels 4th of July "Independence for White Men" - Compares Trump Voters to "Colonizing Slave Owners"
Fake News Makes Up Pretend Quote from Republican South Dakota Governor to Make Her Look Racist
"Tell My Family I Love Them" - Not Making Headlines Today: Last Words of Murdered Police Officer Anthony Dia to Police Dispatch
See more...