HERE are the photos you will not see in The New York Times of the blood-soaked floor of the Chabad house of prayer and hospitality. 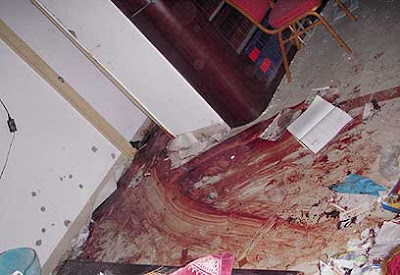 The floors were smeared with blood after the terrorist assault on the Chabad House in Mumbai. (Ynet)

The Mumbai terrorists tortured their Jewish hostages before they were murdered.
Rediff.com reported:

Asked what was different about the victims of the incident, another doctor said: “It was very strange. I have seen so many dead bodies in my life, and was yet traumatised. A bomb blast victim’s body might have been torn apart and could be a very disturbing sight. But the bodies of the victims in this attack bore such signs about the kind of violence of urban warfare that I am still unable to put my thoughts to words,” he said.

Asked specifically if he was talking of torture marks, he said: “It was apparent that most of the dead were tortured. What shocked me were the telltale signs showing clearly how the hostages were executed in cold blood,” one doctor said.

The other doctor, who had also conducted the post-mortem of the victims, said: “Of all the bodies, the Israeli victims bore the maximum torture marks. It was clear that they were killed on the 26th itself. It was obvious that they were tied up and tortured before they were killed. It was so bad that I do not want to go over the details even in my head again,” he said.

Corroborating the doctors’ claims about torture was the information that the Intelligence Bureau had about the terror plan. “During his interrogation, Ajmal Kamal said they were specifically asked to target the foreigners, especially the Israelis,” an IB source said. Israel Matsav has more on the attacks against the Israelis.