Isn’t this the Obama plan? 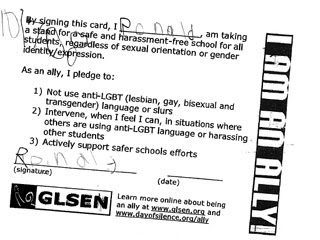 This image shows one of the pledge cards signed by a kindergarten student. (FOX News)

Is a kid in kindergarten really ready for this?
What’s wrong with, “Be nice to people?”
A California school forced kindergarteners to sign a gay pledge card.
FOX News reported:

A California school system refuses to say what action, if any, it will take after it received complaints about a kindergarten teacher who encouraged her students to sign “pledge cards” in support of gays.

During a celebration of National Ally Week, Tara Miller, a teacher at the Faith Ringgold School of Arts and Science in Hayward, Calif., passed out cards produced by the Gay, Lesbian and Straight Education Network to her class of kindergartners.

The cards asked signers to be “an ally” and to pledge to “not use anti-LGBT (lesbian, gay, bisexual and transgender) language or slurs; intervene, when I feel I can, in situations where others are using anti-LGBT language or harassing other students and actively support safer schools efforts.”

The school has acknowledged that the exercise was not appropriate for kindergartners.