The popular Iranian news magazine was shut down by the regime after it published this anti-regime pro-Obama cover. 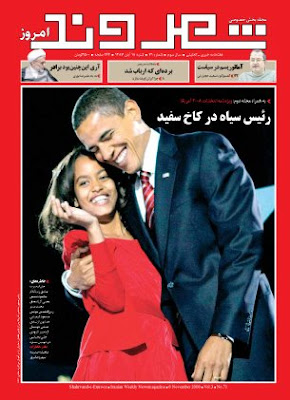 Shahrvand-e Emrouz published a cover with a photo of Barack Obama asking the question, “Why doesn’t Iran have an Obama?”

A Tehran news weekly was shut down by Iranian President Mahmoud Ahmadinejad last week after featuring President-elect Barack Obama on its front cover and asking the question, “Why doesn’t Iran have an Obama?”

The news magazine Shahrvand-e Emrouz [Today’s Citizen] went too far for the hardline president, who quickly had Iran’s Press Supervisory Board ban the publication, the Times of London reported.

The closure of the propular reformist weekly suggests that Ahmadinejad is determined to silence his critics as he prepares for elections next June that could hand him a second-four year term.

The Iranian media has blamed numerous problems in recent weeks on Ahmadinejad. His expansionary budget is blamed for rampant inflation, oil prices have plummeted, aides have admitted that he suffers from strain and exhaustion, and an embarrassing forgery scandal claimed the scalp of his interior minister last week, the Times reported.

Don’t expect the Left to get too excited over the closure.
After all, democracy was Bush’s agenda.

UPDATE: Iranian blogger Kamangir has more on this controversy.