UPDATE: Founding Bloggers has a video interview with Hoder Derakhshan.

Hossein Derakhshan, or Hoder, is sometimes called the “Blogfather of Iran” and is responsible for being the brains behind the thousands of blogs in Iran. He is also suspected of feeding the regime in Iran information on Iranian bloggers in the West.

But, in a strange twist of fate, there was a news report this past week that Hoder was arrested in Tehran.

On November 20, 2008, it was reported that Hoder Derakhshan was arrested in Tehran, after returning there and is accused of spying for Israel.
Middle East Analyst reported:

According to Jahan News, which is close to Iran’s Intelligence community, Hoessein (Hoder) Derakhshan, the Iranian blogger who visited Israel in 2007 from Canada, has been arrested in Tehran.

According to what the article says are “credible sources”, Hossein has admitted to spying for Israel. His confessions are said to include some “intricate” points.

It then goes on to say that Hossein had a picture in Jerusalem post under which he said “I want to humanise Israel for Iranians and to tell them that Israel is not thirsty for blood of Muslims, as propaganda from the Islamic Republic says”.

Note: It is true that Hossein was in Israel, on two separate occasions. However after his second trip here, he suddenly changed his opinion and started becoming vehemently anti- Israel in his blog. He also became a strong supporter of President Ahmadinejad and condemned Akbar Ganji and Ramin Jahanbegloo for being “pro regime change”. 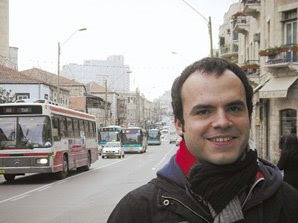 Iranian blogger Hossein Derakhashan. ‘I want to humanize Israel for Iranians and tell them it’s not what the Islamic propaganda machine is saying – that Israelis are thirsty for Muslim blood.’ (Photo: Orly Halperin- J-Post)

Soccer Dad has more on the arrest.