Amir Fakhravar understands that you cannot hold talks with the brutal regime in control of Iran.

CNN interviewed Amir recently on his time in the notorios Evin Prison. Amir also discussed what he thinks of Barack Obama’s plans to talk with the brutal Iranian Regime:

Fakhravar does not believe Obama will have any success talking with the Iranian regime.

Amir Abbas Fakhravar as arrested 19 times as a student in Iran. In November 2002, while Fakhravar was still at university, he was sentenced to an eight year sentence in the Evin prison for publishing a criticism of Ayatollah Khamenei. One time he was beaten in front of a court before being thrown into prison. In late April 2006, he arrived in the United States from Dubai where he had been greeted by Richard Perle who interrupted his trip to central Asia in order to meet Fakhravar in a hotel. They had been in touch through a contact since 2003. This past weekend Fakhravar won a conservative journalism award in Florida. 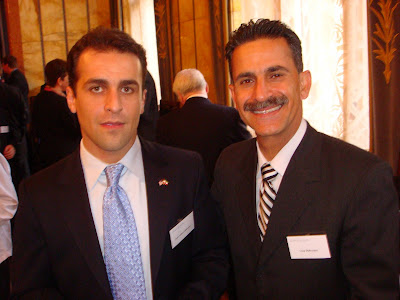 Amir-Abbas Fakhravar (left) is an Iranian writer, and former journalist for the now banned pro-reform daily newspapers Mosharekat and Khordad. He is known for his political activism and has been described as one of Iran’s student leaders. Fakhravar has been imprisoned in Iran for his political activism 19 times, with his first experience at the age of 17, when he was still in high school. He is currently based in Washington, DC.

This photo was taken at the Democracy and Security Conference in Prague, Czech Republic in June 2007 where I spoke with Amir.