Not bought into the politics of hope-n-change, top Iranian cleric Seyed Ahmad Khatami promised Friday worshippers that Iran will keep its “Death to America” slogan. 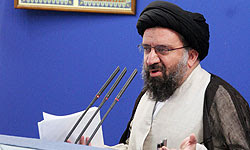 Khatami vowed that the people’s slogan of hatred will continue to be heard.
Fars News reported:

A top cleric vowed on Friday that Iranians will continue opposition to the US for as long as the United States maintains its arrogant stance towards the Islamic Republic.

“Statesmen in the United States should know that as long as they keep their arrogant attitude towards Iran the slogan of our people will remain the same and will not change,” Seyed Ahmad Khatami said in a Friday prayer sermon in Tehran.

“Our people’s slogan of hatred, which is death to America, will continue to be heard,” added Khatami, a member of Iran’s Assembly of Experts that selects and supervises the supreme leader’s activities.

The cleric also advised US president-elect Barack Obama not to follow in the footsteps of incumbent President George W. Bush when he enters the White House on January 20.

Hope and Change only goes so far.