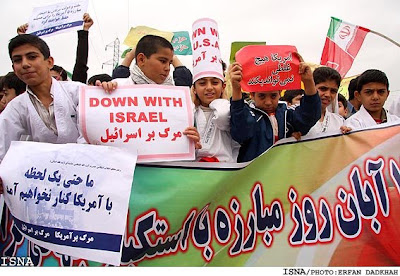 The regime held a massive anti-Israel anti-US rally this week in Iran. (ISNA)

Cuba and Venezuela, two countries known for their criticism of US policies are now expressing satisfaction over Barack Obama’s victory.

“If Obama takes some action to ease the embargo, it would be welcomed and of course it would be of help, but we’re prepared for conditions to remain the same,” Cuba’s Foreign Investment Minister Marta Lomas said Wednesday in a statement.

There is optimism about Obama’s declaration during his campaign that he would be ready to talk about easing restrictions on travel and on remittances the money US Cubans send to family and friends in Cuba.

Former Cuban leader Fidel Castro who remains first secretary of the ruling Communist Party, on Tuesday called Obama “intelligent, well-educated and composed” in an endorsement released in the official press.

Meanwhile… Iran is urging Barack Obama to keep his promises and make fundamental changes in US foreign policy.
Iran is looking forward to a US troop withdrawal from the region.