Here’s Some Change You Can Believe In…

In September 2004, after making a public visit to Israel, Mithal al-Alusi was expelled from the Iraqi National Congress and sacked from his job at the De-Baathification Commission. This led him to establish the Democratic Party of the Iraqi Nation, which ran in the January 2005 election. It received only 4,500 votes, far from enough to gain a seat in the Council of Representatives. However, his list won enough votes to obtain one seat for Baghdad Province in the December 2005 election.

On February 19, 2005, Al-Alusi’s car was ambushed by armed assailants in the Hayy Al-Jami’a neighborhood of Baghdad. His two sons Ayman, 30, and Jamal, 22, were killed in the attack, as well as one of his bodyguards. 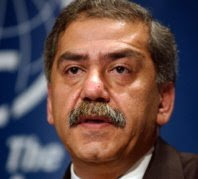 In December 2005, Al-Alusi, the leader of the Democratic Party of the Iraqi Nation, DPIN, was elected to the Iraqi Council of Representatives as an independent. He supports a close alliance with the United States of America, the United Kingdom, Turkey and Israel.

On June 5, 2007, Mithal al-Alusi thanked America and the Allied Forces for their sacrifices.

I was fortunate enough to hear Al-Alusi last June in Prague.
Mithal al-Alusi is an amazing man.

Today, Al-Alusi was acquitted by an Iraqi court for making a trip to Israel.
It is no longer a crime.
Haaretz reported:

An Iraqi court on Monday acquitted a legislator on Monday whom the government had prosecuted for making a trip to Israel, ruling that his visit was not actually against Iraqi law, the defense lawyer said.

The Iraqi government had accused member of parliament Mithal al-Alusi of committing a crime by visiting a country Iraq considers an enemy, in breach of a law it said had been retained since the rule of late dictator Saddam Hussein.

Like most Arab countries, Iraq has no diplomatic relations with Israel. Members of parliament voted to strip him of his legal immunity in September, over the trip he made earlier that month for a conference on terrorism and security.

The court affirmed that there is no explicit law against visiting Israel, even though passports issued by Saddam’s Iraq warned recipients that they were not allowed to go there. Passports no longer carry that prohibition.

“There is no law preventing any Iraqi from travelling to any country,” Alusi’s lawyer Tariq Harb told Reuters.

He said the court had restored Alusi’s immunity and that parliament had had no constitutional right to strip him of it.

“Alusi will regain all his rights,” he said, adding that he would resume work at parliament soon.

Alusi, a secular Sunni politician, says he was the victim of a campaign against him because of his outspoken views against Shi’ite Muslim Iran, an ally to many of Iraq’s ruling elite.