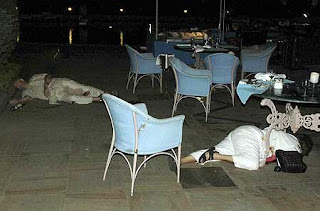 A scene of death from Mumbai (The Mirror)

A British couple trapped at the Taj Mahal Hotel during the terror attack claims CNN put their lives in danger.
Wales Online reported, via Free Republic:

A SOUTH Wales couple caught in the Mumbai terror attacks claimed last night that CNN put their lives at risk by broadcasting where they were.

Lynne and Kenneth Shaw, of Penarth, warned that terrorists were listening in to the media to pinpoint Western victims.

Mrs Shaw claimed the American cable TV channel had broadcast details of where they were at the Taj Mahal Palace Hotel.

She has appealed to the media to be careful with the information it broadcasts because safety could be compromised and lives lost.

The couple flew back into Heathrow yesterday morning on a flight arranged by the British Consulate.

Mrs Shaw had been forced to hide under a table as terrorists stormed the Taj Mahal Palace Hotel.

She and her husband were later rescued by Gurkhas and taken straight to the Australian Embassy for safety.

The couple were at the end of a month-long visit to India and were staying in Mumbai for a few days before heading back to the UK.

From her home in Penarth yesterday, Mrs Shaw said: “We have been asked by the British terror police not to talk to the press.

“But the reason I would not want to talk to anyone is because our safety was actually compromised by CNN, which broadcast where we were.

“The terrorists were watching CNN and they came down from where they were in a lift after hearing about us on television. For that reason I would appeal to the media to be very careful about what they broadcast.

Lynne and Kenneth Shaw, of Penarth, South Wales, were in a restaurant at the Taj when the terrorists attacked.

The couple hid under a marble table until they were rescued:

The couple then hid under a marble table “cuddling each other” until help came, but she was terrified the men who tried to help them were terrorists.

“I thought we were going to be executed,” she said, adding that she only felt safe when she recognised the uniforms of Gurkhas as they were led down the stairs. There was blood, guts, bullet cases. There was even the odd body,” she said. “It was awful,”

UPDATE: Michelle Malkin has a response from CNN.
They deny the charges by the Shaws.