In his latest tape Ayman Al-Zawahiri warned America to convert to Islam and give up beer. 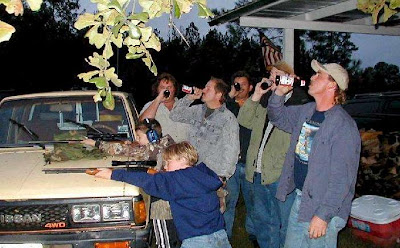 Al-Qaida’s No. 2 leader appeared in a new video posted Friday calling on Americans to embrace Islam to overcome the financial meltdown, which he said was a consequence of the Sept. 11 attacks and militant strikes in Iraq and Afghanistan.

Ayman al-Zawahri, whose 80-minute recording touched on a number of subjects, also lashed out at Afghanistan’s government and said any U.S. gains in Iraq will be temporary.

Zawahri’s new recording came in the form of a question-and-answer session with an off-camera interviewer.

Appearing in a white turban and robe, Zawahri discussed the roots of the U.S. economic crisis. He said it was a repercussion of the Sept. 11 attacks in the United States, and that the crisis would continue “as long as the foolish American policy of wading in Muslim blood continues.”

“The American economy was afflicted by a downturn and loss of investor confidence in the market following the events of Sept. 11,” he said.

“The modern economy has been destroyed by the strikes of the mujahedeen (in Iraq and Afghanistan) and usury,” he said, using the Arabic term for holy warriors.

Under Islamic Sharia law, usury, like drinking alcohol, is among the grand sins.

Zawahri then called on the American people to “embrace Islam to live a life free of greed, exploitation and forbidden wealth.”

Jim Hoft
Jim Hoft is the founder and editor of The Gateway Pundit, one of the top conservative news outlets in America. Jim was awarded the Reed Irvine Accuracy in Media Award in 2013 and is the proud recipient of the Breitbart Award for Excellence in Online Journalism from the Americans for Prosperity Foundation in May 2016.
Horrible! San Diego Cathedral Vandalized with Pentagons, BLM, Swastika and Biden 2020 Graffiti (VIDEO)
James O'Keefe DROPS A MOAB! -- Project Veritas Releases EXPLOSIVE Video of Ilhan Omar Connected Harvester EXCHANGING CASH FOR BALLOTS! --VIDEO
New York City Voters Receive Mail-in Ballots Marked for Military Use Despite Never Serving in the US Military
WOW! Quack Dr. Fauci Attacks "Outlandish" Reporting by FOX News and his Differences with Dr. Scott Atlas
Hooray! Sen. Rick Scott Introduces Bill Requiring Mail-In Ballots Be Counted within 24 Hours of Election Day
See more...