They started lining up at 3:30 AM this morning to see Sarah Palin.

The Battle Creek Enquirer had live video from the rally earlier.
Ozark’s First says it was a family affair (Video). 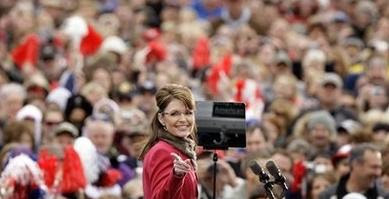 Country Star Naomi Judd came out of retirement to stump for Palin.
At least 20,000 came out for a rally that was originally scheduled for 4,000. 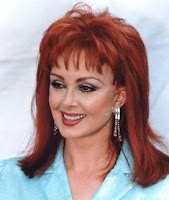 Country star Naomi Judd just took the stage at the rally, decrying how Gov.
Sarah Palin has been treated by the “liberal media.” The News Leader reported, “Mama Judd is mad,” she told a cheering crowd. “I could not stand by one
more moment while this fabulous woman is viciously attacked.”

Dozens of people bundled up to wait almost nine hours to get a good spot to see GOP vice presidential candidate Sarah Palin at a campaign rally in Springfield.

The Alaska governor is scheduled to begin her speech at noon Friday at a rally in the parking lot of Bass Pro Outdoor World. Some spectators braved a stiff wind and chilly air to arrive by 3:30 a.m., long before gates opened at 9 a.m.

The event was initially scheduled for an arena at Missouri State University. But after all 4,000 tickets were snapped up within 90 minutes Wednesday, the Republican Party moved the event to Bass Pro’s massive parking area to accommodate a larger crowd.