It was a beautiful day in St. Louis.
The arch grounds were packed with thousands of supporters to hear Barack Obama talk about hope, change and socialism.
The crowd loved it: 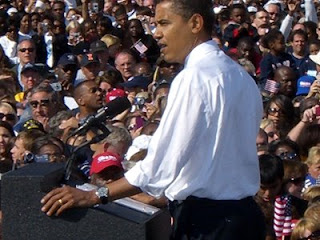 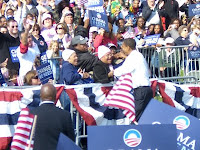 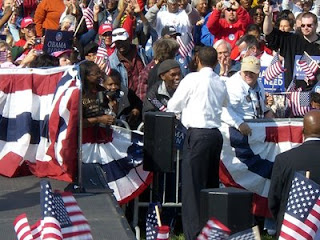 Meanwhile… News surfaced today that Bill Ayers, the “guy who lived down the street from me”, just happened to share an office with Barack Obama in Chicago.

“Barack Obama would give tax cuts to Americans who don’t pay any income taxes – it’s a policy Democrats used to call welfare, what Barack Obama calls ‘spreading the wealth around,’ and what Joe the Plumber calls socialism.” —Tucker Bounds, spokesman McCain-Palin 2008

** Tax Policy Center: Under Obama’s Plan, he would direct $100.6 billion In 2009 To Households Who Pay No Income Tax. This is in essentially a check written to the 56.9 million households who will pay no income tax under existing law, plus an additional 15.4 million households who will have either no tax liability or receive a net refund due to Obama’s refundable tax credits. (Table T08-0191, “Senator Barack Obama’s Non-Health Tax Proposals As Described By His Economic Advisors: Impact On Outlays And Tax Units With No Individual Income Tax Liability, 2009-18,” Tax Policy Center, 7/25/08)

Jim Hoft
Jim Hoft is the founder and editor of The Gateway Pundit, one of the top conservative news outlets in America. Jim was awarded the Reed Irvine Accuracy in Media Award in 2013 and is the proud recipient of the Breitbart Award for Excellence in Online Journalism from the Americans for Prosperity Foundation in May 2016.
Honeywell Leaks Technical Details of F-35 Lightning II, F-22 Raptor and B-1 Bomber to China - Joe Biden Gives Then a Slap on the List
EXCLUSIVE: Arizona GOP Party Chair Dr. Kelli Ward Weighs in on Biden DOJ Interference in AZ Senate Forensic Audit
California Gubernatorial Candidate Caitlyn Jenner Tears Up, Gets Emotional for California in First Major Interview with Hannity (VIDEO)
BREAKING: Biden DOJ to Interfere with State of Arizona Forensic Audit of Maricopa County Ballots ...Update: With DOJ Letter
Black Lives Matter Marxists Release New List of Demands - Includes Complete Defunding of Police and Banning Trump from Future Office, Just Because
See more...