Beating Women Is Now Good Humor on the Left…

Mere Rhetoric discovered the Left’s latest “Get Out the Vote” humor ad.

The video starts out with Sarah Palin describing her foreign policy experience as Governor of Alaska.
Then big 300 pound football player Terry Tate slams her to the ground and mocks her as she cringes in pain:
(attack at 1:20 of the video)

This is supposed to be funny. 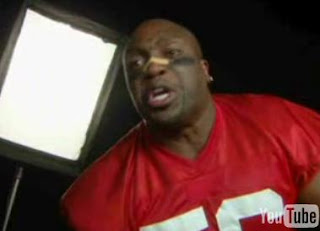 Forgive me for not seeing the humor of a 300 pound man slamming a woman on the ground and mocking her as she writhes in pain.

Related… Just to set the record straight– This was sent to me earlier on Sarah Palin’s foreign policy experience:

Question: What is the ONLY National Guard unit on permanent active duty?

Question: Who is the Commander in Chief of the 49th Missile Defense Battalion of Alaska National Guard?

Question: What U.S. governor has a higher classified security rating than either candidate of the Democrat Party?

According to the Washington Post, she first met with McCain in February, but nobody ever found out. This is a woman used to keeping secrets.

She can be entrusted with our national security, because she already is.