The Trail says that 20,000 supporters came out to cheer Palin ticket.
And, Sarah Palin went back on the offensive against Barack Obama on his weak record on national security. 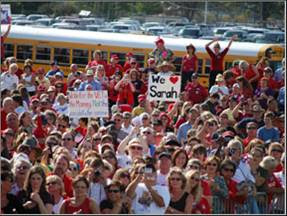 GOP vice presidential nominee Sarah Palin continued attacking Democratic nominee Barack Obama before a crowd of roughly 20,000 outside the Richmond International Raceway, while also promising that she and John McCain would help revive the U.S. economy.

Suggesting that Obama would undermine a possible American victory in Iraq — “Just once I would like to hear Barack Obama say he’d like America to win” — Palin said the Democrat would jeopardize the economy further by raising taxes and expanding the federal government.

“America, we cannot just afford another big spender in the White House,” Palin said before the enthusiastic audience. “Our country is facing tough times, and needs a tough man as president.”

…The crowd was so large, in fact, that some supporters standing far back from the stage began chanting ‘Louder, louder!’ midway through Palin’s speech after she had paid homage to military veterans in the crowd.

From the comments below it sounds like it was another great Palin event today.

UPDATE: Michael Trauffer has a great set of photos from today’s Virginia Beach rally including this one: 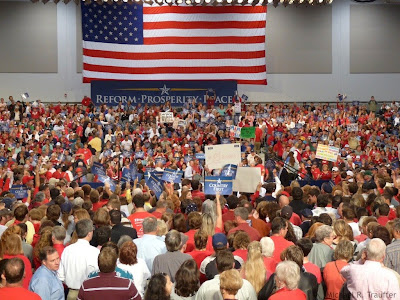 There was certainly no lack of enthusiasm in Virginia today!