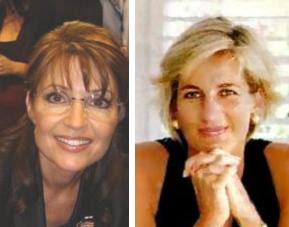 The governor of Alaska and the princess are tenth cousins, while Palin and Roosevelt are ninth cousins once removed, said Ancestry.com, online genealogists based in Provo, Utah.

The genealogical connections are not the first to gain attention in the US presidential campaign. Last year, Lynne Cheney said she found while tracing her family roots that her husband Vice President Dick Cheney was a distant cousin of Democratic presidential nominee Barack Obama.

This ought to send the liberal media over the edge.

UPDATE: Hockey mom Sarah Palin will drop the first puck of the season when the Philadelphia Flyers open the regular season against the New York Rangers on Saturday.

Alaska Governor Sarah Palin, the nation’s most popular hockey mom, will join the winner of the Philadelphia Flyers regional search for the “Ultimate Hockey Mom” contest and drop the puck at the ceremonial opening face-off as the home team Flyers host the New York Rangers at the Wachovia Center on Saturday, October 11 at 7 p.m.

“Because of the tremendous amount of publicity she has brought to our sport, we invited the most popular hockey mom in North America to our home opener to help us get our season started,” said Comcast-Spectacor Chairman Ed Snider who founded the Flyers in 1967. “We are very excited she has accepted our offer and we are very proud of the publicity she is generating for hockey moms and the sport of hockey.”

The Flyers have been searching for the ultimate hockey mom in the Greater Philadelphia Region through an on line contest which asked hockey players or hockey moms themselves to submit their hockey mom poster to the team.