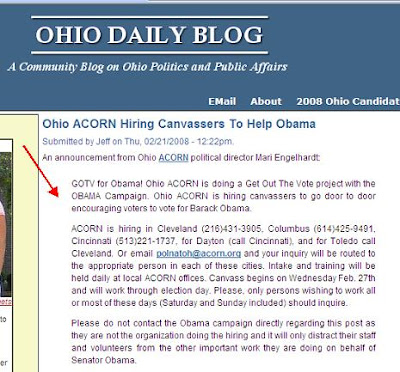 Two different Ohio blogs including Ohio Daily Blog posted an email from ACORN on February 21, 2008 announcing that Ohio ACORN was holding a Get Out The Vote project with the OBAMA Campaign.

Today, Sarah Palin told Obama on the Rush Limbaugh Show to rein in his forces after the thousands of bogus voter registrations they have turned in this year.
The Politico reported:

“Obama has a responsibility to rein in ACORN,” Palin said during an interview with conservative radio host Rush Limbaugh.

Palin said the group is responsible for the “unconscionable situation we are facing now with voter fraud” and attacked the Obama campaign for not addressing the problem after the McCain campaign sent a letter to the Democratic camp urging action against voter fraud in September.

Shortly before Palin went on the air, the Obama campaign e-mailed around its response, dated Sept. 23, characterizing the McCain campaign’s concern as “a starkly political maneuver to deflect attention from the reality of the suppression strategies pursued by national, state and Republican Party committees.”

Meanwhile… The Buckeye Institute has filed a well deserved RICO suit against ACORN in Ohio.

UPDATE: Obama said that criticism of the MASSIVE ACORN VOTER REGISTRATION FRAUD is meant to suppress the vote.
Sick.

Here’s the video of Obama excusing ACORN- the latest “distraction”:

Sweetness and Light has more on Obama’s dishonest claims about his association with ACORN.