Palin: “Obama Has Left Wing Agenda Prettied Up to Look Like Mainstreet Politics”

Governor Sarah Palin continued slamming radical Barack Obama to an overflow crowd tonight in Omaha.
6,000 supporters filled the hall to capacity but there were still hundreds waiting outside hoping to get in. 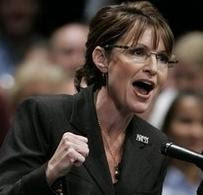 Sarah Palin lit up an overflow crowd at the Civic Auditorium’s Music Hall with a 24-minute mixture of attacks on Democrat Barack Obama and a pledge that she and John McCain can deliver lower taxes and energy independence.

The Alaska governor and No. 1 hockey mom also adopted the University of Nebraska at Omaha’s hockey team. “I love that cheer — Go Mavericks,” said Palin, who insists she and McCain are the real Mavericks ready to bring change to the nation.

In her remarks, Palin warned that Obama and the Democrats have “a left wing agenda prettied up to look like Main Street politics.”

The folksy vice presidential candidate even poked fun at herself that the spoof of her by Saturday Night Live’s Tina Fey.

But in the end, her task was to rally the Republican faithful behind McCain in Nebraska 2nd Congressional District that has become one of the most surprising battleground of this presidential campaign.

Sarah Palin repeated the line twice Sunday that Barack Obama “pals around with terrorists.” At the Omaha rally, Palin elaborated on her attack, claiming one of Obama’s advisers had described Obama and Ayers as “friendly.”
Ouch!