Saracuda scores…
Popular Alaska Governor Sarah Palin stumped in Maine today.
She joined country singer Lee Greenwood and Maine Senator Olympia Snowe for a rally with thousands of supporters at the Bangor airport.
The people of northern Maine enjoy moose-hunting, fishing and snowmobiling.
So, Sarah Palin should have felt right at home.

Sarah Palin evoked the highlights of her running mate’s debate messages Thursday as she worked to pick up at least one of Maine’s four electoral votes.

“You know, we want to cut taxes because we think like Joe or Jane the plumber thinks, OK?,” she said. “Our opponents want to raise taxes because they think like that other Joe, that six-term senator from Delaware whom I’m running against.”

Palin made a quick stop in Maine, not getting farther than Bangor’s airplane hangar. The campaign hopes that the visit could help pick up at least one of the state’s four electoral votes. (Two are allotted to the statewide winner and one to the winner of each congressional district. Bangor is located in the state’s second congressional district, which is viewed as more conservative.)

Maine has voted for the democratic candidate in every US election since 1992 but this year the McCain-Palin ticket see a chance to take back at least one electoral vote from the state.

The Maine Republican Party announced Tuesday that they were forced to move the Palin rally to a larger venue due to the high demand for tickets to see the popular governor.

UPDATE: The followers of Dear Leader are are not going to let an Ohio plumber stand in their way to socialist utopia.
They are currently on a mission to destroy him.

The Obamabots were giddy to discover that Joe doesn’t have a license – which, according to Jim Geraghty, if the smear artists bothered to check the law, he only needs for commercial work, not residential work.

UPDATE: Americans for Limited Government sent out their own cartoon of “Barack the Plumber” today: 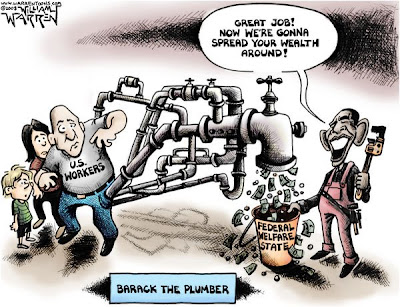 UPDATE 2: I am Joe the Plumber.