The Obama Campaign is also trying to hide this from America…

When did Barack Obama meet terrorist Bill Ayers?
It was likely earlier than we suspected.
And, it was not by accident. They just didn’t happen to “cross paths.”

Barack Obama admitted in his first book that he would “carefully” seek out radical and Marxist friends while at Columbia University:

“To avoid being mistaken for a sellout, I chose my friends carefully. The more politically active black students. The foreign students. The Chicanos. The Marxist Professors and structural feminists and punk-rock performance poets.”

Chester posted earlier that noted anti-Israeli professor Edward Said was teaching at Columbia University when Obama went to school there.
No doubt, Obama was a big fan of Edward Said while at Columbia.
Later Barack and Michelle were pictured at a Pro-Palestinian Jew-bash with Edward Said in Chicago: 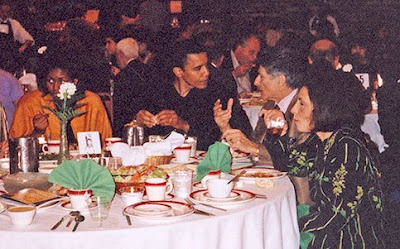 Barack and Michelle Obama attended several events in the Arab community with anti-Israel speakers including this event in May 1998 where Professor Edward Said gave the keynote speech. (Bill Baar’s West Side)

Well, wouldn’t you know… Pro-Palestinian Edward Said and Bill Ayers were also very close friends. In fact they were so close that Said wrote a forward to one of Ayer’s anti-American books.

And, get this… Bill Ayers was attending Bank Street College in New York City, working on his M.Ed. (complete in ’84) while Obama was attending Columbia.
And, Bill Ayers was getting another M.Ed. at Columbia (completed in ’87) when Obama was working for two New York firms!
Bank Street College is less than a quarter of a mile from Columbia, and they collaborate on courses. It is inconceivable, given their concentric politics, and Ayers’ penchant for recruiting black radicals, that they did not meet in the two years they were studying within a quarter mile of each other.
Hat Tip Discerning Texan

Tom Maguire suspected that Bill Ayers and Barack Obama even worked on an education project together back in 1987– well before their work together in Chicago in 1995.

The World According to Chester reported:

Ayers was apparently a good friend of Edward Said, who was also a professor at Columbia (he died in Sept. 2003), whom Obama also knew there and continued to associate with afterward. There’s a picture circulating of Obama and Said in 1998, at a dinner of Arab Americans in Chicago where Said was the keynote speaker. Said served on the Palestine National Council and and wrote a forward for Ayers’ book “Fugitive Days”.

Said was also a friend of Khalid al Mansour – who by the way also gave lectures at Columbia – and it is Mansour who supposedly helped Obama get into Harvard. (The one thing we know for a fact, he didn’t make in on his grades, because he didn’t graduate Columbia with honors.)

It’s not surprising that just like Barack Obama, Dr. al Mansour also ranted against whitey. Khalid al Mansour was even caught on tape ranting against Jews and whites in his mosque sermons.

Every one of these people is/was extremely pro-Palestinian and that’s NOT something that Obama’s people want advertised in cities and states with a large Jewish voting block, AND one more thing….you aren’t supported and trusted by people like this, unless you’re one of them and have proven it.

Barack Obama did not just happen to cross paths with Bill Ayers in Chicago as the NY Times reported.
The relationship between Obama and Ayers has likely lasted decades.
And, Obama has associated with a core group of radicals since his days attending school at Columbia University.

Related… Jack Cashill at American Thinker, who has a lengthy career in advertising and publishing, suggests that Ayers may have worked with Obama on his first memoir.
Hat Tip Rich D.

Bob Owens wrote more about the depth of the relationship between Barack Obama and Bill Ayers.

UPDATE: HotAir has a devastating video of John Murtagh, whose family’s home was bombed by the Weather Underground, question the Obama-Ayers timeline. Murtagh says that Obama’s relationship with Ayers goes back into the 1980’s.