Wow!… You can’t even do this in Iraq!

The Obama Campaign is holding several illegal “Get Out the Muslim Vote” Drives at swing state mosques this week!

Now you can go to Eid Celebrations and sign up to vote for Obama at the same time!!

Central Ohioans Against Terrorism is reporting that Muslim Americans for Obama has announced a series of “get out the vote” events at mosques in Michigan, Pennsylvania, New York, New Jersey, Virginia, and Ohio this week during Ramadan celebrations.

The announcement was posted at the Asian Americans for Obama website: 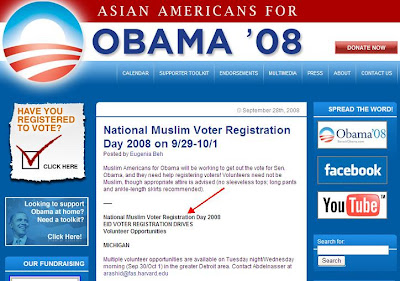 Click to Enlarge
They are asking volunteers to please wear the appropriate clothing.
These “get out the vote” events flagrantly violate the tax exempt status of these participating mosques which are strictly prohibited from supporting or endorsing any kind of partisan political activity.

Central Ohioans Against Terrorism has a list of the mosques that will be holding the illegal voter registration drives this week.
Here’s one example:

More… Ohio Obama supporters are dragging homeless people off the streets in to vote.

…The law includes a provision that allocates 25 percent of the seats to women and a prohibition on the use of mosques, pictures of clerical leaders and government institutions during the campaign season.

But, they don’t have Barack Obama on the ballot.
Hat Tip BG

UPDATE: Here is this more on the Dar Al Hijrah mosque:

Dar al Hijra in VA – is the same mosque that two of the 9/11 hijackers attended. Their former imam, Anwar Al-Aulaqi, is wanted by the FBI for questioning related to the assistance he rendered to 9/11 terrorists.