OK. This is getting really freaky. 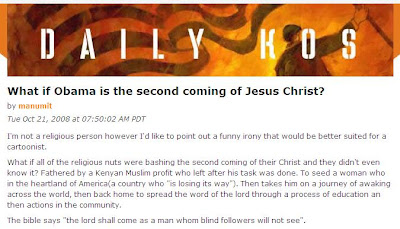 It was probably those enlightened teachings by Reverend Wright that won them over.

I’m not a religious person however I’d like to point out a funny irony that would be better suited for a cartoonist.

What if all of the religious nuts were bashing the second coming of their Christ and they didn’t even know it? Fathered by a Kenyan Muslim profit who left after his task was done. To seed a woman who in the heartland of America(a country who “is losing its way”). Then takes him on a journey of awaking across the world, then back home to spread the word of the lord through a process of education an then actions in the community.

The bible says “the lord shall come as a man whom blind followers will not see”.

So next time you run into a religious nut and they start talking about all of this deep mystical Muslim / African non-sense. Just remind them where Jesus came from, and where the human race came from.

They may not be 100% certain that Obama is the Messiah yet but they are clear on who is this year’s devil anyway.