Internal polling shows that the race in Iowa and Pennsylvania is tightening up otherwise you would not see Palin and McCain spending precious time and energy there.
In the last two weeks of the campaign season keep an eye on where the candidates are spending their time and money to see where things are close.

John McCain is campaigning for the “redneck” vote in Pennsylvania on Tuesday and Wednesday. 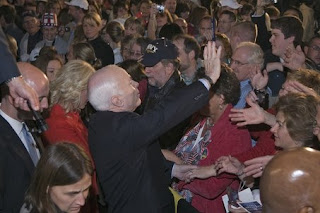 Sen. John McCain, R-Ariz., with his wife, Cindy, greets people at a rally Tuesday at The Forum in Harrisburg. (PennLive)

GOP candidates heads back to Iowa…
John McCain and Sarah Palin will stump in Iowa this weekend.
The Des Moines Register reported:

Republican presidential nominee John McCain and his running mate, Sarah Palin, are making plans to campaign across Iowa this weekend, staying engaged in a state where polls show the GOP ticket trailing.

Palin, the governor of Alaska, plans to headline a noon rally at Sioux City West High School on Saturday.

Palin is then expected to appear at a Saturday afternoon rally at Hy-Vee Hall in Des Moines. The events will be Palin’s first solo campaign appearances in Iowa since joining the ticket in August.

McCain is planning to host a rally Sunday with his wife, Cindy, in Cedar Falls at the University of Northern Iowa’s West Gym. The McCain campaign had not yet confirmed the schedule Tuesday.

The weekend schedule would be McCain’s fourth visit to the state since mid-September, and Palin’s second trip to Iowa in that time.

Meanwhile, Democratic nominee Barack Obama had to scrub plans to campaign in Iowa on Thursday to visit his grandmother, who is gravely ill, in Hawaii.

And… Governor Sarah Palin will be at the Missouri State University campus in Springfield, Missouri on Friday morning.