John McCain was campaigning in Davenport, Iowa this morning.

Iowa?
Real Clear Politics has John McCain down by an average of 11.8 polling points to Obama.
However, via FOX News, the McCain campaign says the numbers are much lower— in the low single digits.
Once again– It is good advice to be wary of the liberal polls. 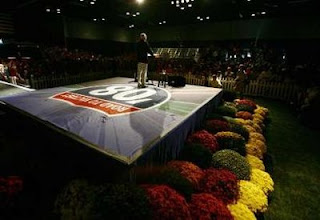