FOX News reported tonight on the tape that the LA Times is withholding from the public showing Barack Obama toasting former PLO operative Rashid Khalidi at a Jew-bash in 2003.

Also, World Net Daily and The Politico are reporting that the McCain Campaign is demanding that the LA Times release the tape! 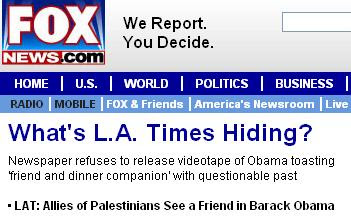 The Los Angeles Times is refusing to release a videotape that it says shows Barack Obama praising a Chicago professor who was an alleged mouthpiece for the Palestine Liberation Organization while it was a designated terrorist group in the 1970s and ’80s.

According an LA Times article written by Peter Wallsten in April, Obama was a “friend and frequent dinner companion” of Rashid Khalidi, who from 1976 to1982 was reportedly a director of the official Palestinian press agency, WAFA, which was operating in exile from Beirut with the PLO.

In the article — based on the videotape obtained by the Times — Wallsten said Obama addressed an audience during a 2003 farewell dinner for Khalidi, who was Obama’s colleague at the University of Chicago, before his departure for Columbia University in New York. Obama said his many talks with Khalidi and his wife Mona stood as “consistent reminders to me of my own blind spots and my own biases.”

Khalidi is currently the Edward Said professor of Arab Studies at Columbia. A pro-Palestinian activist, he has been a fierce critic of American foreign policy and of Israel, which he has accused of establishing an “apartheid system” of government. The PLO advocate helped facilitate negotiations between Israel and the Palestinians in the early ’90s, but he has denied he was ever an employee of the group, contradicting accounts in the New York Times and Washington Times.

The LA Times told FOXNews.com that it won’t reveal how it obtained the tape of Khalidi’s farewell party, nor will the newspaper release it. Spokeswoman Nancy Sullivan said the paper is not interested in revisiting the story. “As far as we’re concerned, the story speaks for itself,” she said.

This is the same answer that I was given last week. 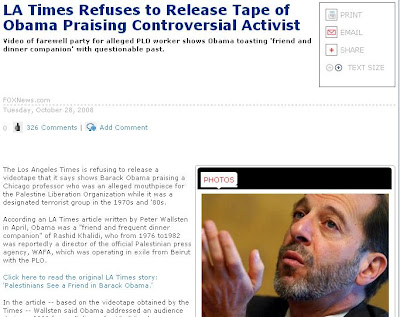 World Net Daily is reporting that the McCain Camp is speaking out on the controversial tape:

“The election is one week away, and it’s unfortunate that the press so obviously favors Barack Obama that this campaign must publicly request that the Los Angeles Times do its job – make information public,” he said.

Goldfarb was referring to videotape the Times said it obtained of Obama delivering in-person testimonial in 2003 at the farewell party of anti-Israel professor Rashid Khalidi, who at the time was departing the University of Chicago for a new teaching position at Columbia University.

Mona Cheron at National Review has more on Obama’s close friendship with the radical Khalidi.