ABSOLUTELY AWESOME!!
Cleveland Browns quarterback Brady Quinn and lineman Joe Thomas joined John McCain and Sarah Palin today at a rally outside Cleveland.
Quinn, whose father is a Vietnam veteran, thanked John McCain for his heroism and service to his country.

There’s a better video of Governor Palin introducing Brady Quinn at the rally and letting out a little yelp here.

Senator McCain thanked Quinn and Thomas for their “courage” and for “being great athletes in the great tradition of the Cleveland Browns.”

McCain also thanked Brady’s father for his service in Vietnam.

Governor Sarah Palin got the crowd barking as well, linking the Browns’ come back 2007 season to the McCain campaign’s attempt to catch up in the polls.

“So good too, to be here in the home of the Browns,” she said. “Thank you so much, all the many members of the Dawg Pound. Thanks for joining us.”

Thousands lined up in the rain to see John McCain and Sarah Palin. 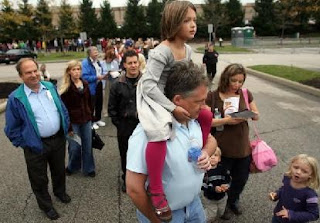 Thousands of people waited hours in line to see Republican McCain and Palin at today’s campaign event at the Strongsville Recreation Center. Unfortunately, hundreds did not make it inside the center after it quickly filled up. (Cleveland.com)