Joe Biden warned America this weekend of a coming calamity.
Biden also warned us of an unusual response by Dear Leader.
Biden implored that we trust Dear Leader during this time. 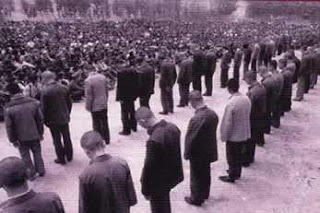 Dear Leader will not let you down.

Yikes!
The fact that Obama has hung around with terrorists, Marxists, racists and Maoists his whole life since he was 18 doesn’t help any.

Senator Joe Biden told Democratic supporters this weekend that the US will be slammed with a major crisis if Obama is elected president.
Biden also admitted that the Obama Camp will respond in an unusual way(?)
The Political Radar reported:

“Mark my words,” the Democratic vice presidential nominee warned at the second of his two Seattle fundraisers Sunday. “It will not be six months before the world tests Barack Obama like they did John Kennedy. The world is looking. We’re about to elect a brilliant 47-year-old senator president of the United States of America. Remember I said it standing here if you don’t remember anything else I said. Watch, we’re gonna have an international crisis, a generated crisis, to test the mettle of this guy.”

Well, they can always blame Bush.
That’s worked pretty well in the past.

UPDATE: They’re onto me…
It looks like I’ve already been put on Dear Leader’s list.
This just came in the email: 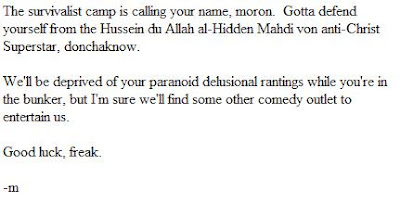