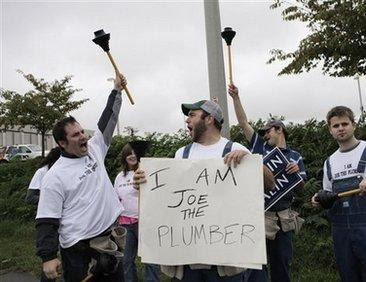 CNN reported today that a group of “plumbers” waved plungers at Obama in Virginia.

** Here’s more on the raging plumbers.

They were all wearing “I am Joe the Plumber” shirts.
There were no reports on half moon sightings when they bent over.

About 6,500 showed up to see The One. The center holds 10,500.
The crowd booed McCain- This did not appear to make any national headlines.

Meanwhile… John McCain defended “Joe the Plumber” from the outrageous Far Left/media attacks since the Ohio plumber who dared to question Barack Obama:

“The response from Senator Obama and his campaign yesterday was to attack Joe. People are digging through his personal life and he has TV crews camped out in front of his house,” McCain told a rowdy crowd at Florida International University. “He didn’t ask for Senator Obama to come to his house. He wasn’t recruited or prompted by our campaign. He just asked a question. And Americans ought to be able to ask Senator Obama tough questions without being smeared and targeted with political attacks.”

Joe Biden and Barack Obama ought to be ashamed of themselves.