And, you thought 2000 was bad?
This year’s election is shaping up to be one of the most controversial in history. Just this week a federal judge ordered Ohio’s top elections official to verify the identity of newly registered voters by matching them with other government documents. The very next day a 6th U.S. Circuit Court of Appeals set aside the federal judge’s order on verifying registrations.
And, so it goes.

To further ignite the voter fraud-voter registration debate this week was the news that a national community organizing group is being investigated in at least 14 states and several swing states for massive voter registration irregularities. This news would make headlines anyway but what made it worse was that Barack Obama worked for this organization, theAssociation of Community Organizations for Reform Now, in the past. Obama trained its local leaders, represented the organization in court, and worked to funnel funds to the organization. The Obama Campaign also donated $800,000 this year to an ACORN affiliate.

The Association of Community Organizations for Reform Now (ACORN) is a community based organization that advocates for low- and moderate-income families. ACORN was founded in 1970 by Wade Rathke and Gary Delgado. Rathke, one of the most powerful of America’s hard-Left activists, is a former member of the radical 1960’s group the Students for a Democratic Society (SDS). The Weathermen terrorist group split off from the SDS in 1969. ACORN says its priorities include: better housing and wages for the poor, more community development investment from banks and governments, and better public schools.

ACORN is also known for its voter registration efforts. 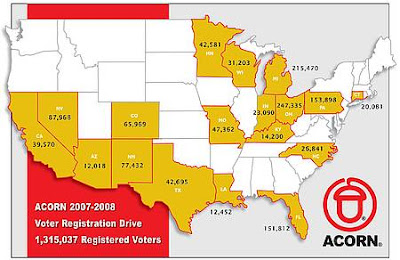 Although the organization prides itself for its registration efforts it also has a long history of scandal. In the state of Missouri in 1986, 12 ACORN members were convicted of voter fraud.
But that was not an isolated incident in Missouri…

** The rest of this report is posted at **Pajamas Media** today includint a state-by-state breakdown.
The best comment on the report at Pajamas Media goes to shnargley:

You conservatives want to have your cake and eat it too. You wanted us of the Left to stop bombing, terrorizing and committing acts of revolutionary rage and participate in the institutions of democracy. Now that we put aside our kidnappings, molotovs, and urine bags to participate in the democratic process, you still complain.

Glenn Reynolds wonders where the feds are on this.

Plus– Gay Patriot did his own research on the ACORN voter fraud with a state by state breakdown and The Wall Street Journal has more.

No wonder Barack Obama distorts the work he did with ACORN…

UPDATE 3: Investor’s Business Daily has an excellent piece on Obama’s background with ACORN.